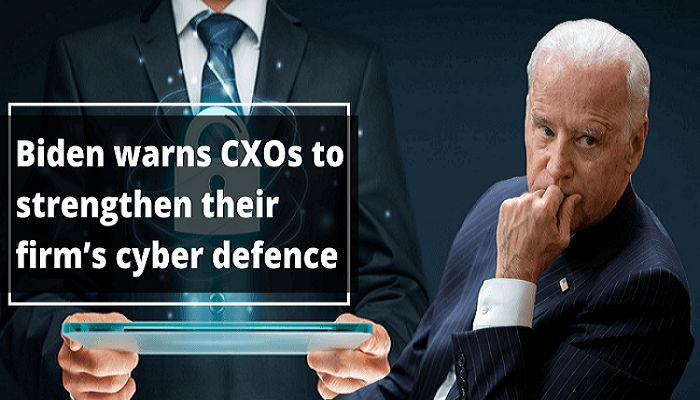 Us president Joe Biden has urged all US companies to make sure that their digital doors are locked tight because of the evolving intelligence that Russia is considering launching Cyberattacks against critical infrastructure targets as the war in Ukraine continues.

What is a Cyberattack on a company mean?

Cyberattacks can damage any business. It is an unfair attempt to steal all the data by gaining unauthorized access to a computer system.

It can erode all the reputations of a company. Cybercriminals use various methods to launch a cyber attack which includes malware, phishing and other methods.

What does CXO mean?

CXO is a Chief Experience Officer who is responsible for all the transactions, experiences and interactions with customers.

Biden told all the business leaders that they must have a “ patriotic obligation “ and should harden their systems against such attacks.

He urged all the US businesses to immediately prepare defences. He also said that federal assistance is available.

He later told in a meeting that Russia is having a very sophisticated cyber capability, and President Vladimir Putin is most like to use these tactics to attack the US.

The Russian government is exploring options for potential Cyberattacks. He said that it’s a part of Russia’s playbook.

He told that Russia is planning Cyberattacks against the US.  The federal government has been providing warnings to US companies about the threats which are imposed by Russian State hackers.

The Cyber Security and Infrastructure security agency has launched a “Sheild Up” campaign. The main aim of this campaign is to help companies in strengthening their defences.

They also urged companies to take back their data and turned on multifactor authentication. They have also suggested taking more major steps to improve cyber hygiene.

Neuberger, the deputy national security advisor for cyber and emerging technologies of the President said that “Notwithstanding repeated warnings, we continue to see adversaries compromising systems that use know Vulnerabilities for which there are patches“. She expressed her frustration at the White House press. She said that some critical infrastructures have ignored alerts from federal agencies.

He urged all the private sector partners to harden their cyber defences.