Ryan Reynolds for Gin and George Clooney for Tequilla, Are female celebrities investing in wine? 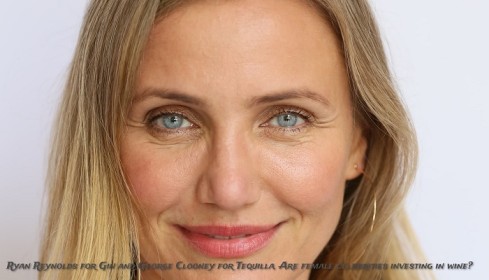 Only the baby boomer generation prefers wine to beer and liquor. The wine business has failed to attract millennials and is suffering with Generation X, as cocktails prepared with spirits such as whiskey and tequila are booming, stealing market share from wine in a saturated market.

Celebrities have traditionally exploited their names and faces to promote alcohol products, but when George Clooney sold his tequila company Casamigos to drinks conglomerate Diageo for roughly $1 billion in 2017, he established the modern model for cashing in on spirits.

"Acting used to be how I paid the rent," Clooney told The Sunday Times when the arrangement was announced.

This sparked a gold rush of celebrity entrepreneurs wanting to replicate his success and cash in on the premium spirits and cocktails boom, from David Beckham's scotch to Ryan Reynolds' gin and Dwayne "The Rock" Johnson's tequila.

However, it has primarily been male celebrities who have benefited from this recipe. Despite outliers like Vera Wang's Chopin Vodka and Kendall Jenner's 818 Tequila, the brands remain largely male, following a pattern seen in the broader alcohol business.

Now, a new generation of female celebrities is attempting to revitalise an ailing beverage: wine.

Now, a new generation of female celebrities is attempting to revitalise an ailing beverage: wine.

The Covid-19 pandemic advanced numerous developments in the alcohol industry, but expensive spirits in categories often promoted by celebrities were among the biggest winners.

According to the Distilled Spirits Council, luxury spirits rose 43 per cent in the previous year, led mostly by tequila and American whiskey, with a 2021′s growth rate finishing at more than double the prior five-year average rate.

Although the United States has the world's largest wine industry, and products such as prosecco and champagne continue to prosper, American consumers are drinking less wine overall than they were twenty years ago.

According to Rob McMillan, executive vice president of Silicon Valley Bank and a well-known wine industry expert, the wine industry has remained committed to techniques that have historically been successful without adequately addressing how the consumer has fundamentally transformed.

"That's the main threat," McMillan explained. "You can't replace this group of folks who think wine is absolutely beautiful." It is their favoured alcoholic beverage, and everyone who follows them does as well to some extent, but they classify wine alongside beer, spirits, ready-to-drink cocktails, and weed."

Female celebrity-backed wine brands have sought to distinguish themselves from other wine products by emphasising aspects that appeal to younger consumers.

Female celebrities have sought to develop a niche within the wine market that caters to younger customers by emphasising size, reduced alcohol content, online purchasing, price point, and brand ownership that includes women as well as BIPOC and LGBTQ+ individuals.

With organic white and rosé wines in four-packs of 250ml cans that don't require a corkscrew or glassware, Diaz and Katherine Power, co-owners of the Avaline wine brand, have leaned trends in accessibility and portability, as well as health and wellness.

Along with being more environmentally friendly, the canned wine concept, with its smaller quantities, makes it easier to consume wine alone, as there is no need to open a 750 ml bottle, following in the footsteps of the thriving RTD (ready-to-drink) market.

The Chicks, who are known for standing up for themselves as women in the music industry and challenging the established quo, have recently entered the wine market with their Gaslighter Wine label, which has received outstanding industry ratings for their rosé. The marketing campaign begins with phrases like "own your power," "say your truth," and "tell your truth." "Don't let them deceive you," even the corks said.

According to Marco Fantinel, CEO of the winery that produces Mary J. Blige's label, the Sun Goddess label emphasises variety. Fantinel stated that Sun Goddess "hopes to throw a light on the wine industry" by offering "greater chances for women and BIPOC representation."

Celebrity women in wine can provide the exposure and financial backing needed for fresh growth in a wine business that is becoming more approachable, inexpensive, and forward-thinking while preserving quality.

Though the day has not yet come for this star side hustle to rival its alcohol counterpart's billion-dollar headline.