US NOT TO RELEASE $3 BILLION IN FROZEN AFGHANISTAN FUNDS 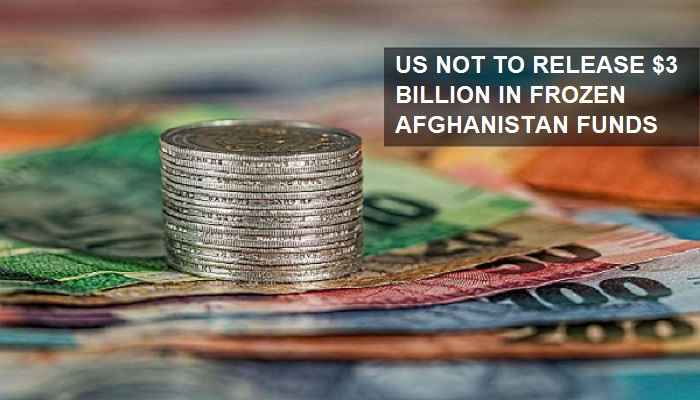 The United States will not release $3 billion in frozen Afghanistan funds, a senior State Department official said on Tuesday, as the Trump administration seeks to put the war-torn nation on a more stable footing.

The money was frozen by Congress at the request of President Donald Trump in March while he reviewed U.S. policy toward Afghanistan. The president has been reviewing options for an increase in U.S. troops and an end to Pakistan aid as part of his new South Asia strategy, but no decisions have yet been made.

"The president has made it clear that we will not release this money until we have a strategy that he can sign off on," said the State Department's assistant secretary for South and Central Asia, Alice Wells, speaking at a conference organized by the U.S.-China Economic and Security Review Commission.

She said there were discussions among officials about how best to spend the money and whether it should go toward stabilizing Afghanistan or be used for other purposes such as education or health care.

The money has been frozen for years under a law known as Section 1244 of the 2010 National Defense Authorization Act (NDAA). It requires that any money that the Defense Department receives from foreign military sales (FMS) must be spent on US military equipment rather than transferred to another country.  The freeze has affected many projects that were underway when Congress passed the law four years ago. The US Agency for International Development (USAID) has warned that it may have to scale back its programs unless Congress lifts the freeze.  The NDAA also blocks the Department of Defense from using funds appropriated by Congress for FMS purposes in Pakistan or Yemen until those countries take certain steps to reduce civilian casualties in their fight against al Qaeda-linked militants.

Under the deal, Washington will keep troops in Afghanistan after 2014 until 2024, when it will pull out all combat forces. Washington has been trying to persuade Kabul to sign a security deal with it before the end of this year.  US officials say that they have not seen evidence of financial mismanagement by the Afghan government but they are worried that some of its leaders may have used these funds for personal gain or corruption.

The US and Afghanistan War

As we all know, The US and Afghanistan War was a result of the Cold War. The Soviet Union helped to create an Afghan communist regime in 1979 with the help of the Afghan communist party. They had been funding the warlords in Afghanistan since 1979, but they were not able to achieve their goal until they invaded Afghanistan in 1989. The Soviet Union fought against the Taliban who were enemies with them. The United States did not want to get involved because they thought that there would be too much loss of life. They had also been fighting in Vietnam at this time and did not want to get involved in another conflict with another communist regime.

In 1992, the United States helped fund a group called Northern Alliance who wanted to fight against the Taliban and install a democratic government (Homerz). This group consisted of many different ethnic groups from Afghanistan, including Pashtun, Tajik, Hazara and Uzbek people (Homerz). The Northern Alliance was able to take control over most of northern Afghanistan after defeating Taliban forces in 1994 (Homerz).

After 9/11, President George W Bush decided that it was time for America to get involved again in Afghanistan so that Bin Laden could be caught or killed (Taylor).